Benefits of adding atezolizumab (Tecentriq) to neoadjuvant chemotherapy in patients with high-risk early and locally advanced triple-negative breast cancer (TNBC) was possible to determine with imaging mass cytometry (IMC) for examining protein expression at the single-cell level, according to data made available at the 2021 San Antonio Breast Cancer Symposium.

IMC provided greater insight into the heterogeneity of TNBC that is not typically available with bulk protein or gene expression information only.

“We are experiencing a revolution in the technologies available for characterizing the molecular complexity of tumors,” Giampaolo Bianchini, MD, head of the Breast Cancer Group in the Department of Clinical Oncology at IRCCS Ospedale San Raffaele, Milan, said in a statement released during the conference. “Among these, imaging mass cytometry allows us to collect unprecedented information about the heterogeneity of tumors and their surrounding microenvironment.”

Samples (n = 243) from the phase 3 NeoTRIPaPDL1 trial (NCT02620280) examining nab-paclitaxel (Abraxane) plus carboplatin with or without atezolizumab were used for the analysis. Over 1 million single cells were identified, and of those, supervised clustering led to definition of 37 robust cell phenotypes. PD-L1 positivity, high stromal tumor-infiltrating lymphocytes, and TNBC type were all defined by significant heterogeneity plus unique cell type and spatial tumor microenvironment (TME) composition.

Of the biomarkers identified, GATA3 and CD20 on TME, HLA-DR in epithelial cells, and Ki-67 both on TME and in epithelial cells were significant for their predictive ability for atezolizumab benefits in that expression above the median was linked with a pathologic complete response (pCR) rate increase of 10% or more (P <.05).

Higher expression of 2 cell phenotypes—PD-L1–positive, IDO-positive antigen-presenting cells (APCs) and CD56-positive neuroendocrine (NE) epithelial cell—were also associated with a higher pCR when treated with atezolizumab. In those with PD-L1–positive, IDO-positive APCs who received atezolizumab, pCRs were 64.6% vs 24.6% for those with high and low expression, respectively (P <.001).

Of note, most interactions remained significant after adjustments were made for PD-L1 status and stromal TILs.

“Unfortunately, one size does not fit all patients and it is possible that some of them may have responded to chemotherapy alone, while others who originally benefited from immunotherapy will eventually relapse. For these reasons, biomarkers are urgently needed to help us identify the patients who will benefit the most from the addition of immunotherapy—potentially leading to chemotherapy de-escalation or chemo-free strategies, and those who will do well just with chemotherapy,” Bianchini said. “Our results demonstrated that spatial data on the interactions among specific cells in the TME might be very informative about the benefit provided by an immune checkpoint inhibitor such as atezolizumab in addition to chemotherapy,”

For the study, investigators used high-dimensional imaging of the tumor, tumor-stroma interface, and the adjacent stroma to investigate the association of various biomarkers on pCR rates. Protein expression in both epithelial and TME cells, cell phenotypes, spatial architecture with PD-L1 status (Ventana SP142), stromal TILs, TNBC types, and pCRs were all considered in 237 patients with IMC and RNA-seq available.

“This type of information can only be provided by technologies that allow us to simultaneously characterize the single cells and their spatial localization with precision,” Bianchini said. “The predictive information we obtained through IMC complemented what can be derived with commonly used immune biomarkers such as PD-L1 expression or the amount of stromal tumor-infiltrating lymphocytes. In addition, we found that several immune-related gene expression signatures that capture immune cell types and function were less informative than the corresponding biomarkers assessed by IMC,”

Sat Jan 1 , 2022
Share on PinterestA youth walks over dried mud on the banks of a river after waters from the seasonal monsoon rains receded in Allahabad, India. Photo by Prabhat Kumar Verma/Pacific Press/LightRocket via Getty Images Researchers have explored the relationship between climate change and mental health in a major literature review. […] 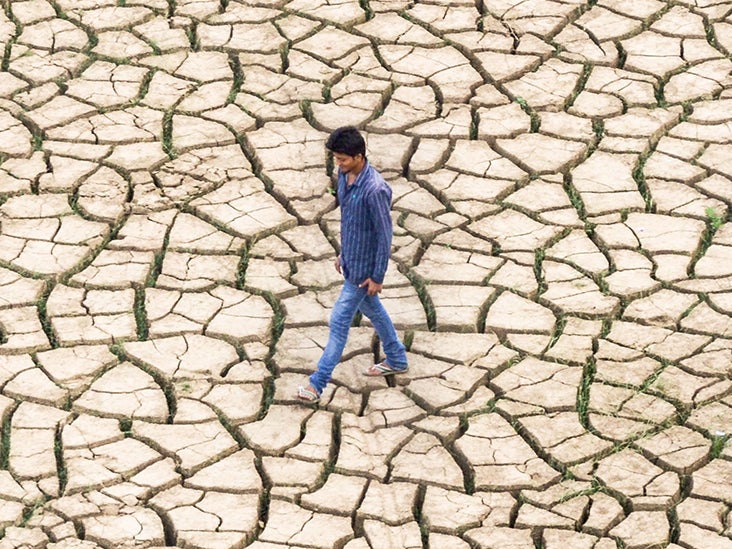