For Women’s History Month, one doctor honors women patients who have been brave, strong, and inspirational.

(In honor of Women’s History Month, we invited our contributors to write about the women who inspire them.—Ed.)

I have received incredible and enormous inspiration from many women patients, and I seek to honor them as part of this series for Women’s History Month. As a consultation-liaison psychiatrist focusing on psycho-oncology, it has been a privilege to treat all patients, but this is a wonderful opportunity to honor the enormous strength of the women I have seen in the clinic and in the hospital.

I will provide some vignettes to highlight several themes that have been particularly powerful—women who tried to put their children’s welfare first; women who had to deal with partner issues while they were struggling with significant health problems; women who were alone or having work-related or financial difficulties. I have not interjected what I did to help or my role in these cases because, instead, I wanted to highlight the enormous struggles and problem-solving of these amazing women.

All of us in health care and mental health care delivery system see patients like this all too frequently, so in writing this, I hope I have done justice to what others also find inspirational. The stories have been modified to protect confidentiality and are just a very small sample. These summaries are sometimes frightening and traumatic, but they are uplifting when one recognizes the spirit and strength that lies beneath.

“Anita” was in her second trimester when she felt a lump in her left breast. She brought it to the attention of her obstetrician, who told her it was probably a cyst and to not worry. After the delivery of her beautiful son, the workup of this “cyst” revealed stage IV metastatic cancer. Her parents, who lived in another state, visited frequently and stayed with the young family during various parts of the aggressive and grueling cancer treatment.

Anita continued, even after she had metastases to brain, until one day, she walked into the basement unannounced and looked over her husband’s shoulder, who was sitting at a computer. She noted that he was making plans over the internet to meet up with a woman from Russia. Anita and her husband separated, but there were ongoing fights and stress over the son, who was now a toddler, and Anita decided to move to be nearer to her parents, since she was no longer able to drive, was unsteady, and needed help with the custody issues that were arising.

An older patient, “Sara,” was a tenured faculty member on main campus at our university and had stage III ovarian cancer. She took off some time during her course of care, but 2 years after she returned to full faculty status, she wanted to get up in front of the faculty group and talk about all the ways the department could have better supported her as she went through the treatment. Further, she felt she had been passed over several times for various leadership, committee, and academic pursuits in the 2 years after treatment because of stigma about having cancer.

About 20 years ago, “Patty” was in her 40’s with metastatic melanoma. She was a single mom with a 4-year-old son and worried about finances and health insurance. With the encouragement and support of her local doctors, her best shot at a cure was to be in an immunotherapy clinical trial at the National Institutes of Health (NIH), which required her to fly to another institution once a month for at least a year, and to be away from her son. Her employer gave her a very difficult time about extended medical leave and made her feel that her place at work might easily be filled if she took too much time off. Without nearby family, Patty had to ask for and rely on neighbors and friends to get her through a very difficult period.

“Grace,” a woman from China with 2 young children was in the United States with her physician husband when she was diagnosed with rectal cancer. Her husband was an alcoholic and would beat her when he was stressed and would also read her medical chart without permission. She was terrified of him for herself and their daughters. Her parents and family back in China did not approve of her husband or the marriage, so they were not willing to help. She felt alone and isolated. She kept bags packed in her car in case she needed them and was able to get to Safe House with her children.

These are just a few of the many, many difficult, inspirational stories that we have had the privilege of helping to address and support, in terms of mental health care and services. As a psych oncology team, a joint program between the University of Michigan Department of Psychiatry and the University of Michigan Rogel Cancer Center, we have tried to determine best ways to screen for distress; have conversations about distress; provide ongoing psychotherapy and pharmacotherapy; transition patients back to the community or to a higher level of mental health service; and help the children, family members, and partners.

Through education and a collaboration with patients and families, we have focused on decreasing the stigma of asking for mental health services and to help clinicians recognize the mental health needs of patients with cancer. Thank you to all the women who have partnered with us and to those who were able to ask for and/or accept help in getting through some very difficult times and medical situations. All have been truly inspirational.

Is there a woman who inspires you? Write to us at [email protected] for a chance to contribute to our Women Who Inspire series.

Thu Mar 24 , 2022
If you have a family history of heart disease, you probably try to stick to a healthy diet to reduce your heart risk. But did you know that focusing on combinations of foods vetted for their disease-fighting ability can help lower risks for many chronic illnesses, including cancer, diabetes, and […] 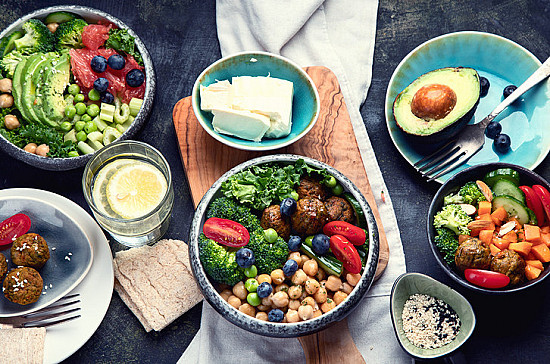