MINNEAPOLIS — In the final hours of the legislative session, Minnesota lawmakers passed a $92.7 million mental health spending package that will impact Minnesotans of all ages, including the growing number of kids who have experienced a mental health crisis during the pandemic.

For months, KARE 11’s “Kids in Crisis” reporting has helped shed light on a surge in cases of kids seeking care at hospital emergency rooms due to a lack of resources elsewhere.

“One way it helps is by creating children’s crisis homes,” Abderholden said. “We have them for adults, but not for children.”

The new crisis spaces would specifically help address the rise in children who come to the ER due to a mental health crisis, but then getting stuck there because they don’t need hospital care, but do need something.

“This could be that something,” she said. “It’s not a new Medicaid benefit. We’re able to add it to our crisis stabilization services, so we can help out kids in residential facilities. They can add a couple of beds for crisis beds, and in shelters, youth shelters as well.”

For kids that do require hospital care, the new legislation also lifts a moratorium on new mental health beds for the next five years, paving the way for Children’s Minnesota to open it’s long-awaited 22-bed youth mental health unit this fall.

“It’s really impactful for us to be able to offer more acute, hospital-based services to kids when they’re in mental health crisis,” said Jamie Winter, Director of Mental Health for Children’s Minnesota.

Winter says Children’s Minnesota saw a 30% jump in need for those acute services last year, and the record demand continues.

“I think what we really see, on the hospital side, is when mental health concerns are not caught upstream, or identified at an early juncture, that’s when kids then need to access our emergency department, or spend time with us in the hospital,” she said.

With that in mind, the mental health bill does increase funding that will expand an existing program called School Linked.

“This really helps families face a lot of barriers to getting their kids to treatment,” Abderholden said. “Instead of taking off of work once a week for 22 weeks, or – in greater Minnesota – driving more than 60 miles to get treatment; with School Linked, we go to where the children are. We make sure that we have mental health professionals there to diagnose and treat.

“School linked has been proven to be pretty effective. We’re just not in every school. I think we’re in about 60 percent of the actual school buildings, and even then, those providers are usually booked by November or December.”

But not all early intervention services got the critical boost they were hoping for.

“One of the areas that is missing is really increasing the rates for day treatment providers, both for children and adults,” Abderholden said. “And kind of that emergency funding, frankly, to kind of stabilize our children’s services.”

She says there’s also no state funding included for the new 9-8-8 mental health crisis hotline, which is set to launch across the country in July.

Erdahl: “What does that mean for the hotline here?”

Sue: “It means that more calls will be answered outside of the state. If we want to send out our mobile mental health crisis teams, which exist across all 87 counties in Minnesota, we need people in Minnesota to answer those calls.”

Erdahl: “This has been at crisis level for a while now, and I know even before the pandemic there were concerns. Where does this get us?”

Abderholden: “This gets us a little bit farther in helping address the crisis. What will fully address it, has yet to be seen.”

It also sets aside several million dollars for new grant programs to help would-be mental health professionals get into the career. Still, Abderholden says, to really address a big workforce shortage, pay rates for those working in mental health also need to be addressed.

Tue May 24 , 2022
Alejandra Castillo, the U.S. assistant secretary of commerce for economic development, speaks at UAA’s Health Sciences Building on Thursday. UAA was awarded a $4 million federal grant to help address a longstanding health care worker shortage in the state. (Marc Lester / ADN) The University of Alaska Anchorage this week […] 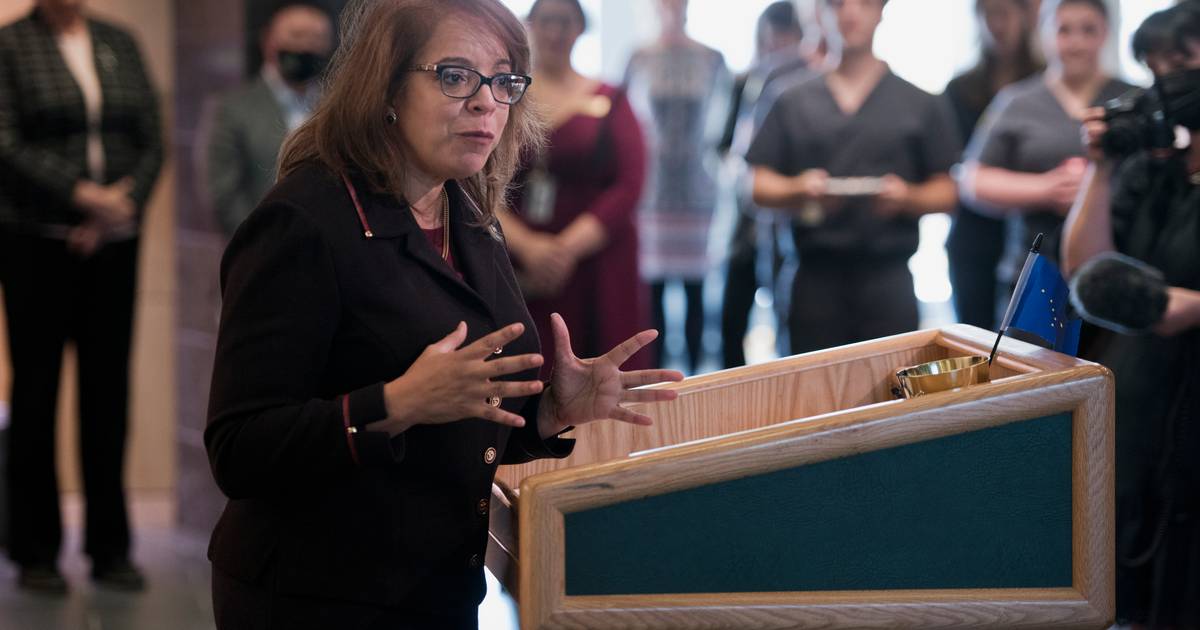